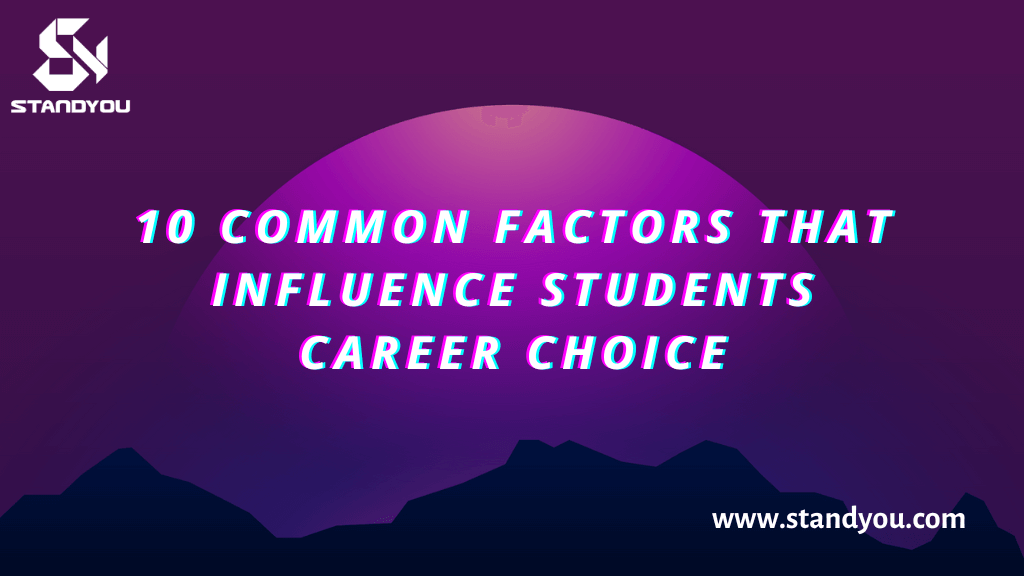 Students are usually in a fix when it comes to choosing a career. Many are confused and don't know the right way to go about it. Getting the right career hinges on the course you study, the university attended, and the company you wish to work with.

These days, students are more confused than before over their career path after they have graduated. Even their degrees don't assure them or give them a proper vision of where their future lies.

Here are the common factors which can influence the career choice of students.

Many students are greatly influenced by the homes they come from. Most parents tend to want their child to take a job they consider premium. Choosing a career choice by parents is common among parents who feel they know better than their children. You will hear parents telling their children to go for careers like doctors, pilots, accountants, auditors or other careers they believe come with huge benefits.  Also parents  who are entrepreneurs usually want their kids to take over their business, even if this is not what the child wants.

This is another factor that Influences students to make decisions which affect their career selection. Many students wish to follow what the society wants. It's common to see students following their friends and co-students in their job selections.

This is common with people who are in group chats and social media groups who have a mindset that the majority choice is the best. Many students who follow this part fail to succeed because they choose what others want, not what they are good at.

Also, many students are influenced by their past performance and activities. They are distorted by their past experiences and interest areas. Many consider their past result in subjects and they based their career choice on it.

Placement opportunities in educational institutions are also influential when selecting a career choice because it helps them survive. Although many students might not be happy with their placements, since it's available and the pay is fair, they choose the jobs therein.

Many students are influenced by their behavioral tendencies when it comes to choosing a career. A student who is a good orator and communicator is likely to choose to work in the media or the communication industry.

Also, students with charismatic and leadership skills will be led to choose a career where he or they can lead and be in charge. Moreover, introverts will likely stay clear of any career which will put them in the public view and prefer jobs where they can work without much attention.

The salary that a prospective job will offer is also another important factor which influences career choice. Irrespective of background or family pressures, many people prefer high-paying jobs. Furthermore, since everyone wants to take care of themselves, many students need to choose what pays the bill.

Despite the clamour for gender equality worldwide, it has been noticed that the choice of career sometimes is influenced by the sex of the student. Make students likely to move closer to engineering jobs and jobs that require muscle.

Female students tilt towards nursing, mass media and music. That's not to say that some of these jobs don't overlap, however, many students consider their sex.

When considering jobs to choose in life, students look at the merits and demerits of certain jobs. How these jobs are measured goes a long way to determining if they will be on their bucket list or not.

Some careers are viewed as very juicy and offer greater perks. Jobs in the oil and gas sector and politics amongst others fall into these classifications. Moreover, some students look at jobs they believe have better career progression which they can work till they retire. Jobs in the civil service and education are good examples.

Everybody has their values which they believe in and respect. This value helps many students decide what type of career they can do or can't do. Some students can't do jobs like lawyers because it works against their values. They believe they will be forced to lie or defend criminals.

There are no career paths that are forbidden for any students, however, there are factors which influence them to choose career opportunities. Choosing a career which makes one happy and where students can make as much money as possible is the best choice. Know the importance of HIPAA Training....